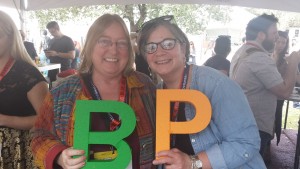 Normally, South by Southwest is known for the technologies that get introduced there, and there were certainly lots of cool things being show in Austin last month. One of the most ubiquitous was Meerkat, a new way to do live video streaming over Twitter. In the way that snapchat handles photos, the recipients aren’t intended to be able to save the video, but the person creating the stream can save it.  Technology aside, the event for me was all about the people I got to meet and chat with. First of all, it felt like the first time in AGES that I got to just hang out with my friend Phylise Banner. Not working, not prepping for presentations, not snatching a few hours in some random airport.  I’m still a little bit annoyed that she won all the great prizes that *I* should have won, but it was totally worthwhile. We had so much fun! We were both in the Interactive Speaker Assistant (ISA) program this year, which means that we helped other speakers get ready for the event.  Mostly it’s a paperwork thing – making sure everyone fills out all the right forms – but it can also involve helping to evaluate session outlines and making sure that sessions match the submitted descriptions and generally just helping out the speakers as much as possible. The best part of the job is that it is OVER as soon as the festival starts! 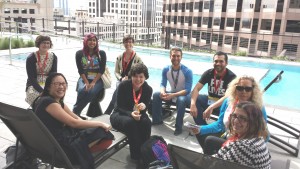 This year, really for the first time, I attended some of the formal “Meetup” groups. This is a purely social session where people get together to chat about specific topics (with over 50 topics to choose from).  I was the official host for the librarians meetup – it was PACKED with librarians and museum people from all over the world. I also attended a meetup for accessibility (hosted by IBM), for SXSW V2V (that’s the venture capital/startup event in July in Las Vegas), and for NASA. This picture shows the ISA meetup poolside at the new JW Marriott hotel, which was the venue for a whole bunch of sessions.  It’s my new favorite format!

I did attend regular sessions, too. The first one, a workshop on using Mathematica, was actually a bit over my head.  I think I could have followed along better, but I didn’t have a full laptop, just my iPad mini. But most of the other sessions I attended were much better suited to me. There was quite a lot of “convergence” programming – sessions that were promoted as of interest to two or more festivals (of the three concurrent ones, Interactive, Film, and Music).  I particularly enjoyed the one from astronaut Don Pettit (@astro_Pettit) called “An Astronaut’s Guide to Photography from Space”.  If you get a chance, check out his work, it’s stunning. I really wanted to see the convergence session by my buddy Andy Cochrane (@avclubvids) but by the time I got there, the room was full and there were maybe 200 people still in line hoping to get in.  His talk was called “Exploring Storytelling in the Digital Age”, and I’m checking every day to see if they’ve posted the recording of it yet. And I did get to see him later at the 20×2 event, where they give the same topic to 20 different people and give them each 2 minutes to talk about it. This year’s topic was “What choice did you have?” Another really good talk was from Jessica Hagy (@jessicahagy), creator of the blog Indexed. She was technically doing a bookreading, but as her book (“The Art of War Visualized“) is mostly graphics, she had the opportunity to share lots of stories about the making of the book.  AND I got a signed copy afterwards! 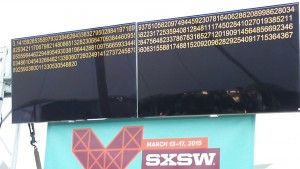 Also, here’s a bonus picture of me in my pi day tshirt. I wear it once a year, every year.  You can’t really tell from this picture, but the image from the front of the shirt is composed of the digits of pi in white, read, and green to make … yeah, “cherry pi”.  It’s from Rich Stevens(@rstevens) at Diesel Sweeties.  As of this writing, you can still order one for yourself through his store, but I don’t know how long he’ll have them available. 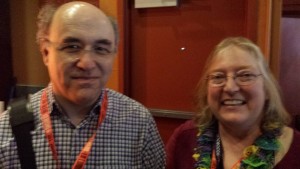 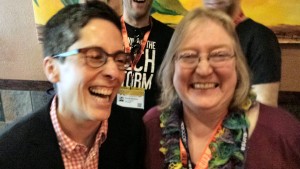 Speaking of Wolfram Alpha, I got to meet founder Stephen Wolfram himself! It was at the MacArthur Foundation reception – did you know he was awarded a Fellowship (that’s the official name, not “Genius Grant”) when he was only 21 year old.  Amazing!  Also there were this year’s Fellows movie maker Joshua Oppenheimer and graphic novelist Alison Bechdel, author of “Fun Home” and creator of the “Bechdel Test” for how women are portrayed in movies. She’s really nice, and we had a terrific time.  I particularly like this picture because Alison’s laughing, and she’s pretty serious in most of the other photos I’ve seen of her. I don’t remember what we were laughing about. 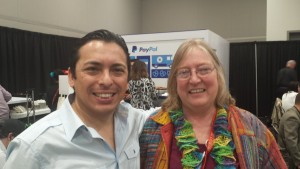 Another part of SXSW that I really enjoy is the blogger’s lounge, this year sponsored by PayPal. There’s always something interesting going on there, and there’s usually some sort of drink and snack as well and some comfy couches for resting on. More importantly, there are desks and chairs and OUTLETS (a key for SXSW success, believe me!)  It’s also a great meeting-place. The lounge is hosted every year by Stephanie Agresta (@stephagresta) and Brian Solis (@briansolis). Though I’d met Brian in prior years, and I’ve used his Conversation Prism in presentation for several years now, it wasn’t until I saw him last summer at SXSW V2V that we actually chatted. I’m flattered that he remembered me! 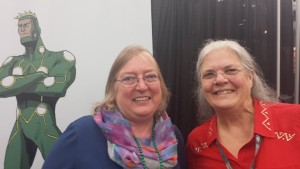 I also look forward every year to the Exhibition Hall. This is where you get to see and touch and play with some of the most amazing products. I was delighted, as always, to see Knowbility there. They’re a nonprofit organization that helps improve accessibility of technology across the world.  Executive Director Sharron Rush (@sharrush), one of the nicest, most generous people I know, is shown here with me and the Accessibility Hero in the background. She’s the one on the right NOT wearing a spandex uniform. 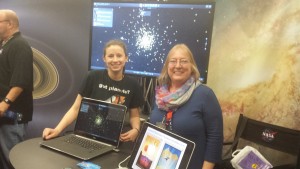 NASA has had a booth at SXSW for several years, but this year it was huge!  They did bring lots of people to staff it, but they still needed more help.  Luckily, I’m an official volunteer Solar System Ambassador, so they let me stand in for the actual NASA scientists when they needed to go to sessions or on break.  I mostly worked with the exoplanet area, showing off a super cool visualization of all the exoplanets we know about.  You can click on a star, zoom in on the solar system, click on the planets, get all kinds of cool information.  It’s built on a game platform, so you can also do some cool 3D rotation effects.  This was also the area that had the solar system “travel posters”. They were so popular, we couldn’t get them rolled up fast enough!  I tried to grab a set for myself 3 or 4 times, but someone else always seemed to want them more, so I ended up giving mine away every time. This is me and Anya, one JPL’s outreach specialists, and a fabulous poster-roller.  I also got to help with the Oculus Rift part of the exhibit – a VR headset loaded with actual Mars imagery.  Also, a super popular station. The funny thing is that although I was thrilled to be allowed to help show off some of the coolest things on this planet, the NASA people were just as thrilled to have an extra set of hands.  Win-win all around!

But don’t think it was all work – I did get to socialize a bit, too.  Here’s me with my Irish buddy John Normoyle (@johnnormoyle), who I met several years ago at SXSW. We’d kept in touch through twitter, but were having a bit of trouble actually connecting in person. One night, I was on my way the IEEE reception, and happened to be passing by the Irish party. GUESS WHO WAS THERE? John then introduced me to Brian and Pete (@Peter0shea). Brian’s an electrical engineer from North Carolina working with LEDs, and Pete’s another Irishman who works for CoderDojo, a nonprofit company that helps communities teach high school kids how to write programs. Clearly, they ALL needed to come with me to the IEEE reception, where we ran into my friend filmmaker and teacher Humberto Perez (@elmaestrohperez) and new friend David Koelle, who, though we didn’t know it at first, turns out to be one of the speakers assigned to Phylise Banner. Whew.  That was the night we then went on to the cat party (thus the cat ears in the fourth picture, below). 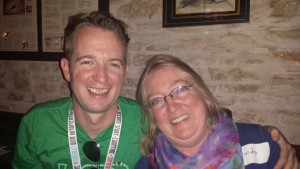 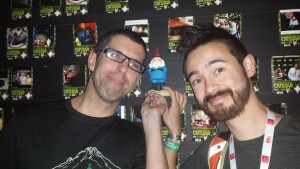 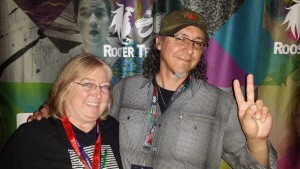 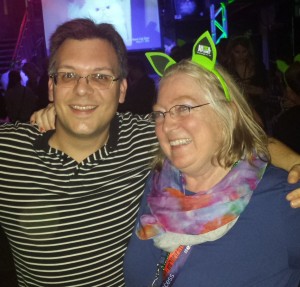 I also managed to see a couple of Austin friends who were NOT attending SXSW, and had not actually taken off like many of the other residents do during this chaotic festival week. Here’s a shot of my favorite bartender from HandleBar (@handlebarAustin and yes, that’s a painting of him in the background), my artist friend Chris (@cheezmuffn), and my tech writer friend Karen (@KarenMullholland).  Karen and I met on purpose, but matched outfits by accident. 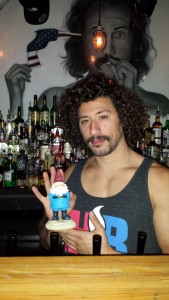 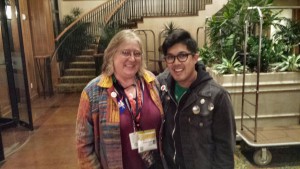 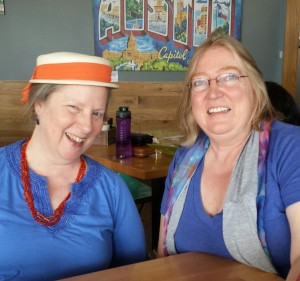