Phoenix Comicon was held at the Mesa Convention center last weekend. A couple of friends I had hoped to see couldn’t make it, but several other friends did attend, and overall I had BLAST.

Turns out I was right, and all these things were true.

One thing I thought was particularly clever, and is an idea I may steal make use of in the future, was the way they did badges. We’ve all seen badges at this type of event and other conferences. PCC had tons of employees, special guests, and regular attendees all over the place. To help make identification easier, the general admission badges were HORIZONTAL and the special access ones (guests, media, staff, volunteers, etc.) were VERTICAL. 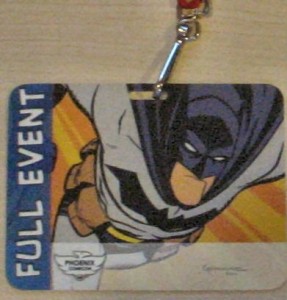 This way, the security, line control, and access control volunteers could easily tell who was who, even if the badges got flipped around.

I got to Phoenix on Thursday night, and went right over to check things out. I found the volunteer checkin, got my badge and swag bag, picked up a set of vintage Star Wars posters (yes, they’ll probably end up in a tube in the garage), and wandered around a bit. Thursday night was a preview night, open only to people who’d purchased a Full Event pass. Also, it was a weeknight, so though the vendor all was full, it wasn’t overly crowded. Wil Wheaton was already there, and he graciously autographed a glossy picture for my friend Rachel (she’s going to LOVE it). I also got to chat with some of the vendors. I was particularly impressed with Julian from Atomic Comics. He knows his stock inside and out, and went out of his way to call a number of places to try to find a specific comic that I wanted.

I was also very happy to see local Tucson artists Dave and Eric from Modern Mythology Press. One particularly interesting aspect of their work is a series of podcasts you can access from their site. You might not think podcasts go that well with comic book sales, but it seems to work! They’re always very nice to talk with, and I’m going on the theory that it is because they are basically nice guys, nothing to do with the potential of me buying their stuff or them being almost the same age as my teenaged-daughter who used to work across the street from them.

All this before the event really even got started!!