I just got back from Phoenix Comicon, and it was (as always) amazing!

There were almost 800 programming sessions across 4 days, 200 highlighted guest speakers, over 650 exhibitor booths. All that, PLUS tons of gaming rooms – both board games and video games. I haven’t heard estimates of attendance yet, but it was a much bigger space than last year, and last year had over 32,000 attendees.

The big event this year was the Babylon 5 reunion – really, the first time most of the cast have been together in 20 years. There were (I think) 14 cast members, and they all got together for a huge panel that I am told hit YouTube within minutes of being over. Many of the events were actually fundraisers – like the Geek Prom on Saturday night that raises money for Kids Need To Read, a group that provides books to underpriveliged kids. Another charity that was everywhere this year was The Hero Initiative (an emergency support agency for comic creators). There was also a Red Cross Blood Drive (which may or may not have been inspired by the vampires in the group).

And costumes? Oh, yes, there were costumes. Everything you can imaging from Star Trek, Star Wars, fairies, vampires, anime characters I won’t even try to name. I thought there was a big increase in Dr. Whos and zombies this year, as well as lots and lots of steampunk outfits. I was surprised at how many people dressed as DeadMau5, and delighted to see someone dressed as the White Spy from Mad Magazine Spy vs. Spy. Of course we had Waldos and Ghostbusters and Disney Princesses. There was a 10-foot-tall Wookie (who had trouble getting through doorways) and several remote control Daleks. And Ponies! Lots of My Little Pony costumes (and other furry animals).
It’s hard to pick my favorite part, but some of the TOP things for me (in chronological order, not order of favoriteness):

I have been a volunteer every year I’ve attended, and I really enjoy volunteering for this event. The organizers go out of their way to match up people with their areas of interest and to reward the volunteers for their time and effort in meaningful ways (though not actual cash).

My biggest complaint about this year was completely my own fault in that I accidentally double-booked myself by signing up to volunteer for two different groups (science programming and guest relations). This meant that I spent a lot of time “on duty” and not as much visiting with friends or seeing other panels. I only got to see Jeff Marriotte for a few minutes, I only got to attend a small fraction of Janni Lee Simner’s book launch party, and I completely missed seeing tons of others like Geoff, Mariska, Rachel, Lisa, Mike, Jason, and more. I didn’t even see the one-and-only Wil Wheaton at all – didn’t even pass him in the hallway or anything!

I did have a nice chat with John Scalzi, my favorite science fiction author. He signed my copy of his novel Redshirts – oops, it was Eric’s copy! It is now signed to BOTH “Brenda!” and “Eric!”. I highly recommend it – very funny with lots of twists I never saw coming. 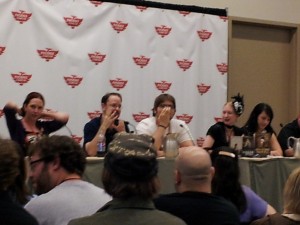 And I got a lovely hug from Robin Atkin Downes as we were saying goodbye.

There were a lot of technical problems with the building this year (freezing cold program rooms, broken escalators, someone pulled a fire alarm and we had to evacuate the building) but overall I think everyone handled it all really well. The evacuation was really quite calm and orderly considering that it involved so many thousands of people.

Mostly, right now (less than 24 hours after the event), I am tired and need to get some sleep. But THEN I will start looking forward to next year!